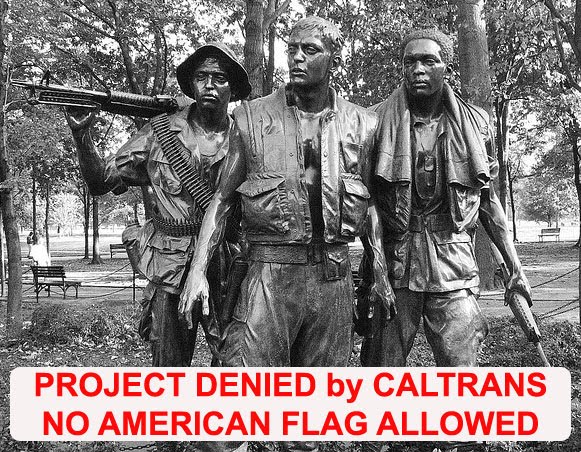 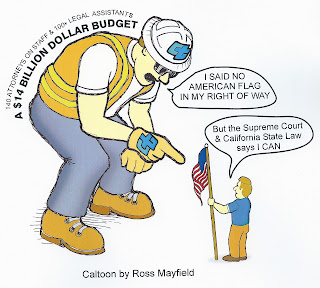 Today, I will begin putting up my American Flag at the entrance into Old Town Orcutt. I will bring my flag home with me every night.

I am doing this because I am displaying the symbol of my Country and because California State law allows me too.

Now it is time for Caltrans to decide if they must comply with their own policy and remove my flag. I would ask that they read what I am calling Checkmate on my website AT http://www.oldtownorcutt.com/ before doing so.

By removing my American Flag…the very symbol of my Country… the United States of America, Caltrans will violate my First Amendment Rights to freedom of speech and expression.

Caltrans violated every citizen of this community’s First Amendment rights when they denied the Old Town Orcutt Veterans Memorial Flagpole.

The Old Town Orcutt Gateway Monument/Veterans' Memorial Flagpole permit was denied by the California Department of Transportation (Caltrans) for a reason that is unconscionable to me. The project contains an American flag and pole displayed in full compliance with the United States Flag Code and California Streets and Highway Code 670.5.

Caltrans denial of the Old Town Orcutt Veterans’ Memorial Flagpole project is based on Caltrans current policy “flying the American Flag in the State right of way, it was established that, "The display of the United States flag constituted expressive activity, within the meaning of the First Amendment" (quote from Caltrans representative).

That policy is based on a lawsuit that Caltrans lost when American flags were being hung on overpasses and zip tied to fence lines just after 911. Two women put up banners “At What Cost” and “Are You Buying This War?” which were promptly taken down by the local police but the American Flags were allowed to remain. These women successfully sued Caltrans for a violation of their first amendment rights.

In defending itself against this lawsuit Caltrans contended that its “then” policy was compelled by its obligation to comply with the 1953 California state statute (streets and highway code 670.5) governing the display of flags, which reads:

The Flag of the United States of America and the Flag of the State of California may be displayed on a sidewalk located in or abutting on a state highway situated within a city, if the type of flag-holder and the method of its installation and maintenance are not in violation of the department's rules.

The opinion of Judge Wardlaw from the Ninth Circuit Court of Appeals stated “At oral argument, CalTrans abandoned its reliance on this statute, and for good reason. It simply does not apply to the facts of this case.”

In making a case for the “Old Town Orcutt Gateway Monument” we are complying with the Caltrans permitting process, California State Law and Federal Law. In Brown v. Caltrans no permits were applied for or obtained to hang flags from overpasses or to fasten them to fences with zipties. In Brown v. Caltrans safety concerns were at issue. Our planned location poses no safety concerns.

The American Flag, appropriately displayed as a symbol of the United States of America, in a public forum does not constitute any form of speech or expression. It simply is synonymous with freedom.

Still one question remains unanswered and is nagging at me to bring to the attention of anyone that will listen. When does the American Flag transition from being the symbol of the United States of America to becoming someone's form of speech or expression?

Since the birth of our nation the purpose of the American Flag was and is to serve as a symbol of our country. The American Flag and Freedom are inseparable much like the heart and soul of a man.

In a landmark Supreme Court Case Texas v. Johnson the Court ruled in favor of Gregory Lee Johnson, then a member of the Revolutionary Communist Youth Brigade, finding that Johnson's burning of the flag was expressive conduct protected by the First Amendment.

When the flag thief first touched that American Flag it became desecrated and It was then and there that the flag transitioned into becoming someone's “free speech or expression”. Did Johnson have a right to burn the flag? Hell no, the flag didn't belong to him (that's my opinion).

Does anyone have a right to burn the American Flag? Yes, because we are free to express ourselves. But at the point of desecration the flag ceases being the symbol of America's freedom. And that freedom must remain forever pure for the world to witness.

This is what I tried to explain to the District 5 Director of Caltrans in a letter to him that I delivered to Caltrans when I submitted our plans for the flagpole. Apparently he wasn’t buying it.

Little did he know at that time that my argument that the American Flag, the symbol of our Country when appropriately displayed, would become Caltrans only defense should OTORA or I decide to bring litigation against Caltrans in the Federal Courts. And should Caltrans use this defense I may be so inclined as to not challenge it. But if I am victorious, I may be the first person in history to win a case and appeal it because I won. Remember I am trying to prove that the American Flag is a symbol of our Country and not political speech.

But wait you say, Caltrans policy states that no one may fly any flags in the State Right of Way. After all Caltrans has an annual budget of fourteen billion dollars ($14,000,000,000.00). Caltrans has a staff of 140 attorneys and over 100 investigators, paralegals, secretaries, claims officers and administrative personnel. Caltrans is the only state office that handles all its own legal affairs. The office is regarded as the nation’s premier government transportation legal office. They must be right.

Before Brown v. Caltrans there was nothing wrong with Caltrans’ policy. Caltrans changed their policy simply because they lost the lawsuit. Caltrans apparently does not even realize why they lost that lawsuit. After all they did appeal the decision of the lower court to the Ninth Circuit Court of Appeals.

Caltrans simply lost the law suit because they allowed freedom of expression on a non public forum (the overpass) ignoring their own pre Brown v. Caltrans policy. And to make matters worse they discriminated on the basis of viewpoint. Had they let the “At what cost” and “Are you buying this war” banners go…there would not have been any Brown v. Caltrans lawsuit.

In a 1939 Supreme Court Case Hague v. CIO, 307 U.S. at 515. the Mayor, the Director of Public Safety, and the Chief of Police of Jersey City, New Jersey denied respondents the right to hold lawful meetings in Jersey City on the ground that they are Communists or Communist organizations.

The Mayor et al lost that landmark decision moving Justice Roberts to delivered his famous dictum…despite the fact that title to the "streets and parks may rest in governments, they have immemorially been held in trust for the use of the public and, time out of mind, have been used for purposes of assembly, communicating thoughts between citizens, and discussing public questions. Such use of the streets and public places has, from ancient times, been a part of the privileges, immunities, rights and liberties of citizens."

The public forum doctrine has been refined over the years, culminating in Perry Education Association v. Perry Local Educators' Association, 460 U.S. 37 (1983), where the Court established a three-tier categorization of public forums. The first category articulated in Perry was the traditional public forum. Traditional public forums include the streets, sidewalks, and parks discussed in Hague as being held in trust for the public. In a traditional public forum, the state may not restrict speech based on content unless it can show that its regulation is necessary to serve a compelling state interest and is narrowly tailored to achieve that interest.

There was no compelling state interest in changing Caltrans policy. Nothing had changed in the sidewalk area. The overpasses were still off limits. By Caltrans own admission the only reason that they changed their policy was because they lost at appeal in Brown v. Caltrans.

Caltrans had a duty to enforce their policy by not allowing banners or flags on the overpasses. Both forms of expression were distracting and potentially dangerous to the public. At the very least, if they were going to ignore the flags being there, they should have remained neutral and ignored the banners too.

The sad thing about this whole mess is that Caltrans was trying to be patriotic by allowing the American Flags to stay on the overpasses but they ended up shooting themselves in the foot, not once but twice when they changed their policy.

This document is respectfully submitted as my opinion on what I believe to be true and factual. 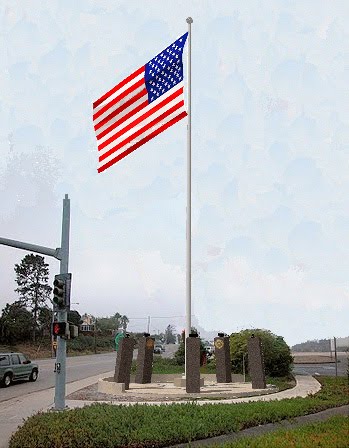 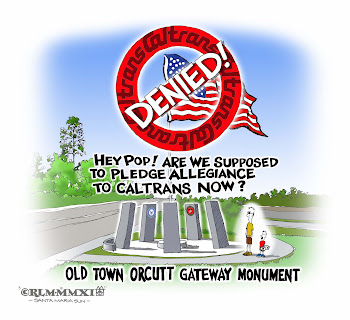 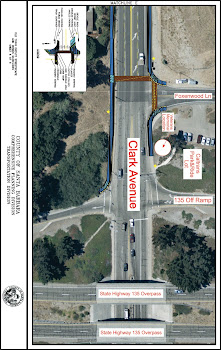 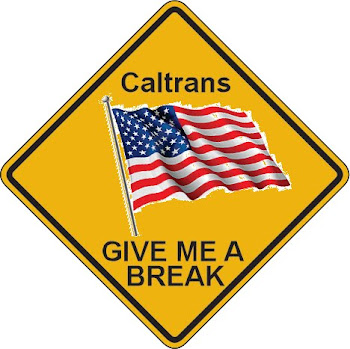 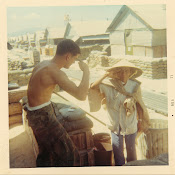